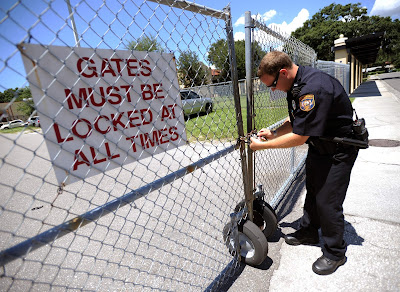 We turn off the lights. Someone locks the door. We lie down. Everyone is weeping or stunned white with fear. Through the door we can hear screaming. The popping coming in bursts. We lie in a prison of darkness waiting for our lives to end.

America’s nightmare, America’s fever dream. America, at war with itself.

I feel duty bound to imagine it. Not to turn away. To see the faces in the paper, know they were real. This is it’s own end: to respect the suffering, the lost lives, the anguish of the bereaved. That respect is also the basis from which we can decide what is to be done.

The talking heads and political battle lines parody that respect. The pro-gun group has an ideology of fear: their own. For all their machismo and espoused individualism their perspective is of a victim hiding in the closet, fearing his own death, wishing for some way to defend himself. This feeling they share with the victims, at least the fear. An irony: the fear of having one’s defenses stripped away allows for the killers to be armed thus. The fear begets the nightmare, a feedback loop.

It is right we should seek justice and preventative measures. I am a parent now; I can barely touch the imagined feeling of the parents of the dead. Merely to imagine it macerates my guts; it is to imagine the worst torture devised.

Gun control is right; there ought to be no well-what-about-this response. The arguments against it are fallacious distractions, rhetorical sleight-of-hand. Rationalizations of a pathological mindset.

Obsession with weaponry is an illness. Pro-gun and anti-gun pirouette around this point now, the anti-gun perspective even trying to disregard mental illness in order to push gun control. Gun control is right: the dead and still-living children demand it. All morality demands it. At once, what is less sane than massacring children?

There is something missing in the argument for gun control, something elided, or compartmentalized. We fear the danger to our children, we fear they will be hunted by a sick man with a gun. The fear keeps us from looking for or understanding from where the sickness derives.

The middle school I attended is around the corner from here. I played on its fields as a small child; my parents’ back yard shares their fence. At one time they were a wetland – birds used to land there when it rained, and I would go out in my raincoat and boots with my toy boat to sail it through the reedy channels in the uneven grass. Back then there was only a low fence at the street, as much to stop wayward soccer balls as anything.

These days I can stand in the back yard and hear the cries of the children at play, sometimes indistinguishable from screams of fear. When we walk by the field with the baby in the stroller there is ten-foot-high chain-link between us and the kids. Where the passageways between the buildings were open for me to come and go as a student, there are now black fences tipped with barbs; teachers entering jingle their keys as they unlock the gate.

The fences and security guards are there to protect the students, ostensibly. From killers with weapons, this climate of fear. But there is also no way out without keys. A prison in all but name.

I should try to avoid hyperbole; it is not a prison. But the mentality, the symbolism and the physical reality are too similar to ignore. The children trapped there, in the square boxes of classrooms, or running over the plastic turf during prescribed breaks, until their daily release. The fences that line this rectangular plot prove continually they are not free. I remember the feeling – as a child one has no way to name it, no agency.

I knew even then that I wanted to be among the non-human. My dream was a cabin in the woods where I lived alone. This competed with an overwhelming need for sex and romantic love, my body driving toward procreation and a fulfilled life. That my urge toward a solitary life in a cabin was strong enough to compete is telling.

I felt like I was an outsider, an underdog, bottom of the pecking order. I only had a few friends. I had no way to cope with the pervasive bullying of middle school. I sometimes contemplated harming myself as some kind of retribution, as if this would finally make the bullies feel some remorse. That I was forced into a cage with those bullies, who themselves had no choice but to be imprisoned, and who were almost certainly traumatized and re-traumatized by their family or culture or both, this should not be underestimated.

We often shrug and say, teenagers. As though this sums up all that we cannot change, without any examination of the assumptions therein. Without examining that perhaps these teenagers are contending with their biology run up against the wire cage of their culture.

Suppose I had lost my loved ones, or been abused by them. Suppose I did not even have those few friends. Suppose I felt even more lonely, even more misunderstood, suppose I was in even more pain. Suppose I had no way to fight out of the cage, and no tools to endure it. Suppose I was driven insane through confinement, along with a crowd of others who were only slightly less insane. Suppose I could not even identify the source of the insanity as the cage. Is it so great a leap, then, from thinking of harming myself, to harming others?

Perhaps we should try to identify individuals who feel this way, head them off before their feelings devolve toward heinous acts. The signs are always there in hindsight. This most recent example is perhaps clearer. But when does it slide into policing our thoughts? When do the overarching structures of our culture, that already force us into classrooms and cubicles, become the arbiters of who is insane and who is dangerous? Would they have called me dangerous because I saw school as a prison? Or because I would rather have lived alone in the woods? Would they have institutionalized me, forced medication on me, for being a quiet and angst-ridden teenager, for fear of what I might do?

The short-term answer is to remove the weaponry. The danger being scaled back thus leaves room for compassion instead of reactive fear. This is right. But the issue is seeded deeper. It derives from being animals trapped in cages.

Progressives with their good intentions will not allow themselves to see this, that their cause of better education plays out as entrapment, and that it is part of a war against wildness, in people and the greater world. They do not see it because they, like myself, were raised in captivity. They, like all of us, are ants in a swarm heading for the river.

While school shooters wage assaults on defenseless children, our species has been waging an assault on land and ocean and non-human life. The seas are being emptied, the land poisoned. Vast landscapes converted by machine to blocks of monocrop or feedlot, bleeding their toxic effluvia. Mountains denuded of trees and strip-mined for metals or coal or rare-earths. Slag-heaps, tailings, runoff. Under every old gas station the soil is corrupted. Meanwhile, the president has his hand poised over the launch button for our nuclear missiles, the most powerful weapon ever devised, aimed at the heart of the world.

In the debate over gun control, this will go unacknowledged. The through-line from mass shootings through mass incarceration to disconnection from our own wildness and that of the living world will not be exposed. It would indict our iPhones and solar panels as much as the AR-15s. It would make us wonder if they are all too dangerous to be allowed.

Another irony: progress with all of its short-lived material benefits will lead to the destruction of those benefits, or many of them at least, as we burn through the world’s gifts, and spin out in the widening gyre of climate effects and harmed landscapes that will make progress increasingly untenable. We will probably not acknowledge it until it has happened – when the cell networks fall silent, and the factories go dark and no longer build their guns.

Meanwhile, some of us feel the pain of what is occurring. We lash out, we take pills, we go live alone in cabins in the woods. But if an ant were to leave the flood of his kin surging toward the river, mark out a solitary path, convention would say he had merely gone astray out of confusion, and, left behind by his hive, he would have lost all reason to be.