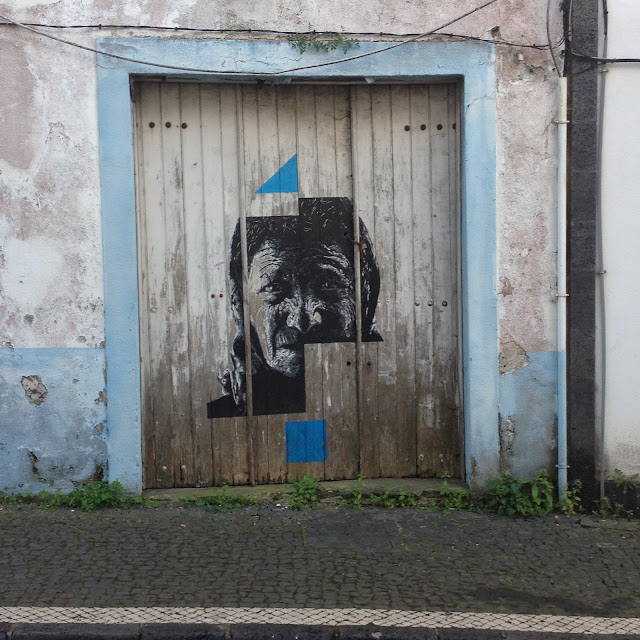 Even here there is the frenetic scurry of rush hour, everyone moving somewhere else all at once. We are in the only metropolis of these islands, if it can even be called that, a small city of only sixty thousand at its greater borders. Anywhere else, a quaint little community. Here the center of all commerce, tourism, government. The greatest concentration of people, and beyond that, of people with greater wealth and power. So this ambivalent business, a city of two minds, both urban and rural, hundreds of miles distant from the mainland on a rugged island, and also the central point of human exchange.

The entire island seems to feel this ambivalence, one foot in the place of the peasant, one in the urban. Internet and smart phones pervade, much food and clothing and other necessities are imported, to say nothing of all the vehicles, appliances, vestiges of the industrial. Meanwhile, farmers ride their horse carts, people work their little potato plots beside the hand-built lava stone walls, that have probably stood for generations.


From the bus we watched a man with sun-oiled skin move his bony milch cows across the rural highway, their udders swollen and pendulous. He slapped their rumps to make them go, in that familiar way, caring and utilitarian at once.

The people like the island are simply here. No pose, no self-conscious façade. Our buses careen comically down the narrowest of streets, mere inches of clearance, as if designed one for the other, not to waste space. And along the way almost face-to-face with us are old people leaned from their windows, watching what passes along their road. Shutters back against the stone walls, lined faces thrust out into the air. Doing nothing but watching or calling to a neighbor. That particular light, sun broken by ocean clouds.

There are also the teenagers waiting after school at the bus station – they could be kids from anywhere. But they’re here, in this tiny town built of lava stone and lime, cinder block and rusty tile, surrounded by banana groves and thick-carpeted pasture. They sit at the station which is a modern box of glass, they stop kissing each other to watch our bus speed by, bearing some news inscrutable to me. Com liçença, I think. Pardon me as I pass.

At the next stop a man boards who barely rises above the seat-backs. These are the people that we think of as our grandfathers, grandmothers. Tiny island folk. His skin has been abraded by outdoor work, his mustache is bristle thick on his lip, black and silver. He has no money for a car, or someone else in the family has the one vehicle. His is like so many working men of middle age I’ve seen from the bus, crowded into the narrow doorways of the cervejarias, thick hands wrapped around the stubs of cigarettes. He sits behind us and the tobacco in his clothes is like the scent of smoked meat.