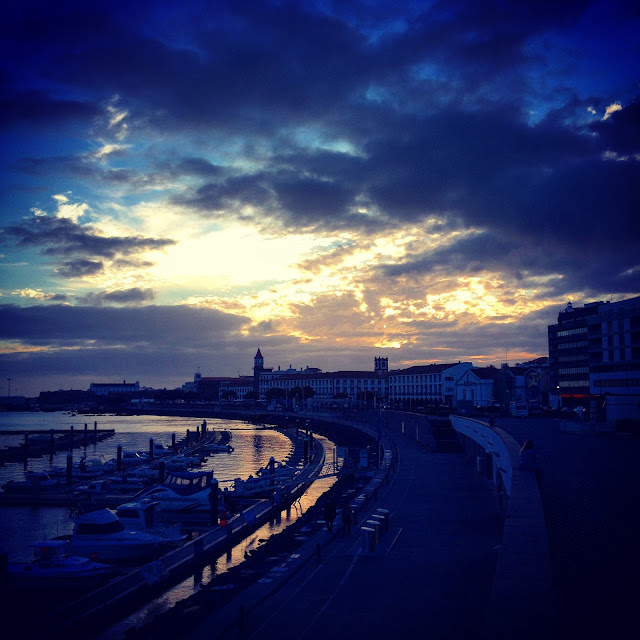 We are in Ponta Delgada, in a guesthouse. A warm, cloudless day. We have the windows open on our second-story room. An old woman is yelling into her phone below. Yapping dogs, songbirds, traffic. Buzz of scooters in the narrow alleys.

The guesthouse is old creaky stairs and floors, bright windows, a little courtyard with laundry on the line. When we go out we sit in small cafes, eat local beef and fried potatoes, drink strong coffee.

Today we walked the city, narrow sidewalks in mosaics of black lava and white lime, moss in the shade of the walls. Everywhere these tall white walls, or sometimes a bright yellow or blue. Cobbled streets rubbed dome smooth. It is a Sunday, and we saw the pilgrims on their walk to church, heard them singing. They bear staffs and cloaks for their circumnavigation of the island during Lent.

This place is a modern European outpost, has been since its inception, a place on the way to everywhere. All these tall church towers, the old square buildings with their green gates and tile roofs and arched windows, their waving flags, these are remnants of what was once modern, now interlaced with the contemporary.

Looking out over the Avenide Infante Dom Henrique, named for Henry the Navigator, which runs beside the sea, there you see the marina with aluminum spars waving and beyond them the great cement sea wall lined with titanic freighters and cranes. This is also the place of the blank-faced modern hotel, its thousand rooms, and the cruise liners that dock here. A place peddling itself to foreigners like us.

There are these many views of these islands. A rugged eruption of volcanic stone resisting the endless battering from the relentless Atlantic, wild as the Big Sur coast, maybe wilder in its mid-ocean isolation.

A place long inhabited by people and their endemic culture, their adaptive peasant ways, still riding horse carts through their little towns, which are hand-built of stone, or herding their cattle on the headland.

Or a place inhabited by people for a mere five hundred years (hardly anything), those people having partitioned in that time nearly every available acre for their buildings or pasture or mono-crops. Forests confined to the steepest ravines, songbirds to the hedgerows of cane between the fields.

Or a contemporary citified place, where the quaint charm of the peasantry and the more startling natural features are peddled as tourist attractions. Great honeycomb edifices lining the shore to house the itinerant banknotes.

Or the helpful man with the stylish clothes and salt-and-pepper beard and easy English, who helps us find a pharmacy that’s open and then wishes that we’ll enjoy our time on these islands, his home.

Another view: I as part of the diaspora of this place, my great-grandparents having departed her as teenagers. Who might well have walked in these very streets, laid eyes on these old church towers. We, like pilgrims on our Lenten journey, returning to pay homage to them. And straining our imagination to think what life must have been like for them, what they must have felt looking on the church tower, or the breakers rolling in from the vastness of the sea that separated them from all other land, or the ship at the pier that would carry them away from all they’d known. Connected by blood, they are the silent dead that nevertheless draw us here, exert their pull on us, our empathy gifting us a ghost of their longing.

And this: We two, on our honeymoon, carrying with us a child, twenty weeks in the womb, already making itself known by its swimming movements.