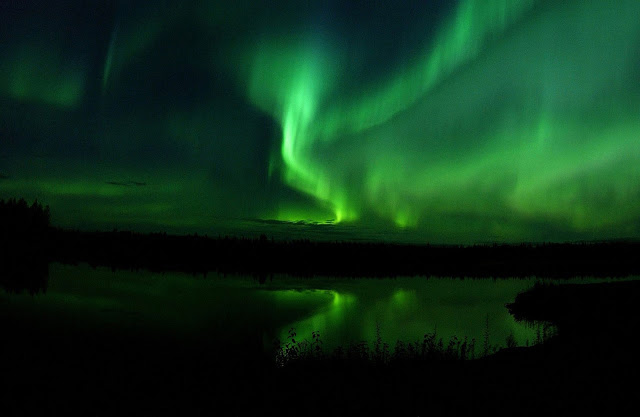 We sit in chairs among all the other travelers, this long, odd tube. Waiting to be propelled. The engines power up, the rumble of vast energy, as if from deep in the earth. Each one of these machines large as some ancient earthwork, monumental architecture made for motion, a tomb for the living to flee the sun.

The engines rev, we taxi to the runway, the incredible power beneath us. We are strapped to a rocket. We all sit denying this to some extent, not to be lost in hysteria. The engines roar, we are pressed back in our seats, the ground speeds by, the feeling of wheels leaving tarmac, the rough friction turns to powered glide. We are airborne.

Almost immediately the ground is distant, everything becoming miniature as if seen from a mountaintop. Then the mountains themselves grow small, the bay is a brown pond with its strings of model ships, its wire bridges. We are breaking away in some sense, from the gravity that has held us all our lives in that narrow space, the earth’s surface no more than a few feet away, at most.

We are out of that band, the thin film of life and dense air. Soon everything is flattened by distance. The steep hills become mere knolls, the neighborhoods where I used to live are encrustations, like barnacles on an inverted hull, or aphids hunkered on a kale leaf.


Far to the north, a white ghost in the haze, Mount Shasta. One of the most prominent features, one of the highest mountains in California, rising in one great lift, an arrowhead of white ice. Now she is small, though I can pick out some of her familiar features, as if on a topographical map. The lower Mount Lassen tracks between us, a small lump of rock, snow in the crags. 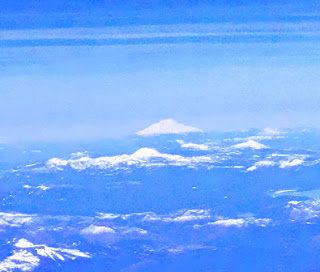 All passing, quickly. We are leaving the realm of our common felt experience. As though peering at the world through a photograph. Once we stopped beside the highway to look at Shasta, huge beyond comprehension in her landscape. Totally unmatched in grandeur, a great crag of black stone and white glacier. The broad tan grassland at her feet, the other mountains around us minuscule in comparison. The mountain challenged the sky in scope. Titanic storm clouds flowed up from the south and broke over her peak and seemed like small facsimiles of her dense power.

I tried to take a picture, centering the mountain in the frame. I shaded the screen to see what I had captured. In the photo the trucks on the highway, near at hand, loomed large. The plain seemed to stretch out and out, then almost disappearing in the haze, a small white triangle against the sky.

The digital translation of light and distance obscures the felt reality, the mountain’s massive character. So with flight.

We close the blinds and rest, leaned on one another, our cramped hard seats. All around us the rumble and vibration, a continuous cry.

When we open the shade again, we are over an unrecognizable land. Before we could point out the snowy peaks we knew. Now the land is flat, a pattern of gray mud, and silvery ice or water, which we can’t say. Dark fingers of land. Are we over Canada? Greenland? Siberia? Utterly unmoored. We are outside the experience of that place, awash in haze. On the northern horizon clouds hold a gentle palette, vague orange, like the reflected light of a fire.

We are flying away from the sun. It drops behind us quickly. The earth is lost in the refraction of the fiery tones through the haze. Ahead is utter inchoate darkness.

We are aloft in the ethereal mind of the world, a small hard dart hurtling through cloud-space, titanic, mutable, creative, ephemeral and durable at once. The wild burning blood of the earth propels us. Higher than any bird. Like ejecta from an asteroid impact. And each of us sitting calmly in our chairs. Above us, space sits massive and heavy and empty like the vault of a cave pierced with starry quartz. Us in our tiny machine, rocketing through the thoughts of the atmosphere.

The sudden unnatural onset of night. We sit in our small chairs for ten hours at a stretch. The surreal impacted tube crammed with silent people forgetting where they are, merely to endure.

Into the deep night of the airline, our waking fatigue, the crew speaks over the intercom, sorry to bother you, we want to tell you, you can begin to see the northern lights on the left side of the plane.

Everyone comes awake, crowds toward the windows. We turn out the light, peer through the double pane. Painted over the polar dark is a shimmering cloud, algae green, like wet wood afire.