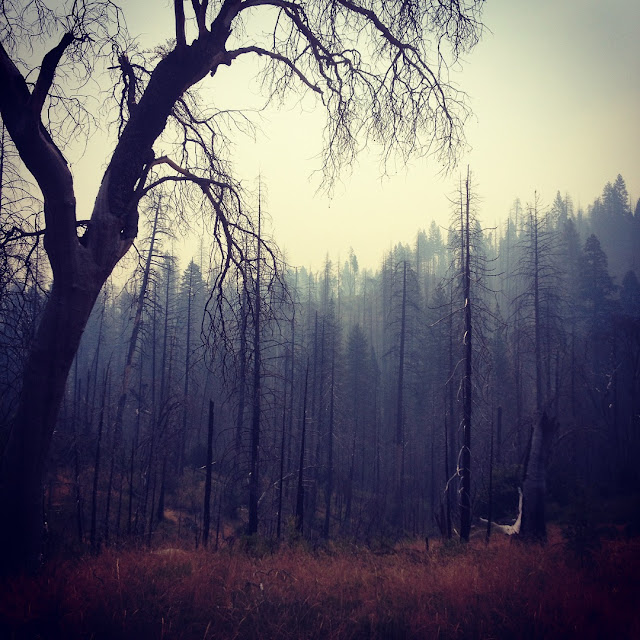 My daughter, this land you were named for is ablaze. The maps on the weather report are red. The satellite images of the smoke show it blanketing the continent.

Here at the coast we are somewhat sheltered. The heat inland draws the onshore breeze from the vast Pacific, her fog muffling us in the damp. It burns away by midday, and on the horizon I can see the sickly haze.


The heat warbles above the roofs. I am not in total despair. I vacillate between utter joy in this beautiful time, when you are one year old, growing well, full to brimming with love – between that and the fear of losing you and all this love we have, the fear of you in pain, of dark times.

Water splashes idly in the backyard fountains. In the mountains, smoke has blotted out Half Dome and El Capitan. Mist and smoke obscure, we say, as though they cover something true. But perhaps they are revealing, of how ephemeral, how insubstantial the things around us truly are.

We may be protected from the smoke here, but like the civilized person sitting in the air conditioned house, our protection is only momentary. The aircon cools us for now, but warms the climate outside the walls.

No place is safe. Fire followed us everywhere. Last year we evacuated from the land where you were born, leaving the tent behind, as the Coyote Fire blazed on the ridge across the road, plumes of black smoke where houses burned, the brilliant torches of the dry pines.

I went to Yosemite and walked across the dam at Hetch Hetchy. The Ferguson Fire had started the day before and the great granite domes were inchoate in the clouds of yellow smog. The leaves of the oaks oppressed and limp in the attenuated light.

We went to Redding on a family visit. 110 degrees, one of the hottest places in the country. We stood in the water at the bank of the Sacramento, cold as snow melt. Home two days, we saw a picture in the paper of a sign for Old Shasta, which we had passed, now on fire, a tornado of embers behind it. Hundreds of thousands of acres still burn, in the Carr Fire, in the River Fire and Ranch Fire.

We cannot help ourselves but name them. Our mythological minds can’t help it. These great beings devouring forest and chaparral, huge beyond reckoning, powerful beyond reckoning, standing in columns of smoke and cinders to thirty thousand feet, raking the continent with their tendrils. Fire is great and living. So we name them as we would name gods. Our intercessors pour offerings of retardant to appease the flames, cut fire breaks around a sacrificial altar of 100,000 acres.

One fire was even given the name Holy. Every night, the newscasters speak its name, intoning Holy Fire, Holy Fire.

We have tried to suppress fire, like a traumatic memory. Now the fuel is collected, one hundred years of it, and ravenous gods gorge themselves.

We have invoked these gods of light and heat every time we flick the light switch or plug in the laptop, every time we turn the key in the ignition. Always taking for granted that they are in our control. And each time adding to the gases that warm the climate, bring drought to kill the trees and make fuel for flame, bring record temperatures and red flag warnings, drop power lines for their flashing spark.

On the news: ...the bizarre appearance in court today of the man accused of starting the Holy Fire...

We are happy to call him insane, shake our heads at his strange gestures on our bright screens, powered by the burning fuel. We are all unthinking pyromaniacs, zealots for flame. We are all complicit in this world-wide sacrifice.
~
In these times, I turn back to Jeffers:

… Beautiful country burn again … Burn as before with bitter wonders …

There were the horrors of his time, the nuclear explosions and wars ravaging millions, all set off by these strange self-conscious apes, what he called a ‘sick microbe.’ He felt empathy and disgust all wound up together – a familiar feeling for many now I think. We are our own torturers, carried along by a great tide of culture and biology. These things are inextricable. The best we can do is swim a little sideways on the face of the wave.

Then what is the answer? Jeffers asks, and answers: Not to be deluded by dreams.

It is as if what we call higher consciousness is a mere accretion upon our brains, designed to rationalize in any way we can the destruction we sow, as we carry out our urges. You teach me this, you who are only a year old, you who are merely being, asking that your needs be met. You depend on us, your parents, for that care, and we are not much different from you, asking, asking, beseeching the world to fulfill us. We sacrifice portions of our lives, our daily effort, on the alter of commerce, and pay to fill the gas tank.

Supposedly self-aware as we are, we might all agree to change course together. We who think about this conundrum, think: There are many things to be done, if only, if only... Is this another self-deception, along with the one that says we can keep burning oil indefinitely, keep dumping water on the almond groves?

… Not to be deluded by dreams …

Burn sacrifices once a year, Jeffers admonishes, to magic horror away from the house …

He was speaking of portraying ‘pain and terror, the insanities of desire’ in art, in order to avoid enacting them in life. But he might well have been gifting us a forest management strategy: allowing the dead wood to burn, feed the god Fire its due.

Sacrifice is anathema to our contemporary culture. It means giving something up, burning it away, placing it beyond reach. Without the steady sacrifices made on smaller altars, the gods will take what they will. They have been hungry too long.

My daughter, I don’t know how we will live. I can only think to take you to some place wilder, and to follow Jeffers’ advice: Walk on gaunt shores and avoid the people; rock and wave are good prophets; Wise are the wings of the gull, pleasant her song.