The Peaks of La Sen 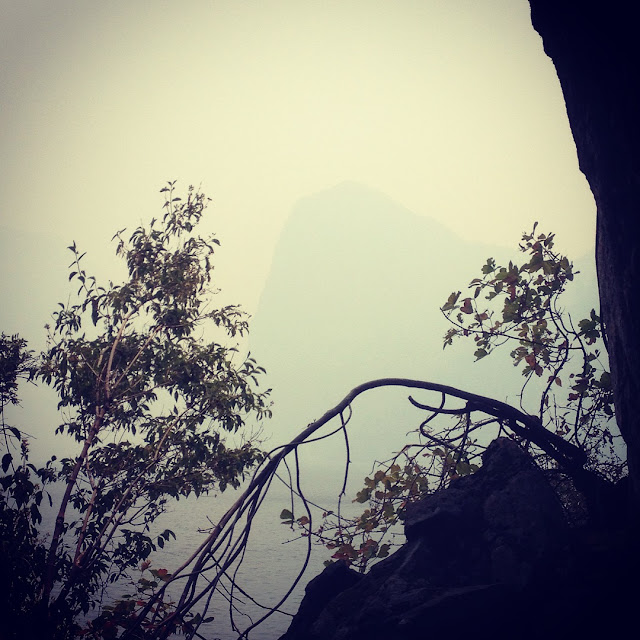 She stood looking down into the expanse of the valley, hazed a sick gray by the sacrificial fires. The mountains on either side blank and flat, jagged lines against a yellow sky. The pyramids led off until they disappeared into the smoke, a staggered line, white clouds billowing from their peaks and trailing west. Stones in a silty pond. She made the sign safety, three times. I am safe, I am safe, I am safe. Then she adjusted the mullein leaf mask around her nose, and started down.


In the valley the air was thick and burnt her eyes. The old road flowed over the land and among the hills that reared up like the backs of sleeping animals, an expanse of stone, flat, wide, straight, unnatural. Pale grass in the cracks. Leafless trees scrawled black limbs in the murk. Here and there were small square houses of mud brick, roofed in tile, the plots of grain beside them, yellow with heavy seed-heads, still in the windless twilight.

She crossed a graystone bridge over a black river. After that there were no more trees, only stumps in endless rows running off on either side.

She came to a house and approached. Smoke trailed thick and white from the chimney. She clapped twice outside the hide door as she might have done at home. No one came. She waited a long time.

Chickens appeared around the corner of the house and stepped carefully around her legs, turning their heads to examine her or peer at the ground beside her shoes.

She clapped again, and the chickens gabbled and ran a little way, and eyed her, wary. The door swung back; a gray-faced woman stepped into the frame.

The woman simply stood, expression closed. Hair lank. The lines beside her mouth were deep.

She signed pilgrim, as though this were not clear enough.

Still the woman was unmoved. At last she bowed and back away and went back to the road. When she glanced back at the house, the door was shut.

She crossed another bridge, another bend in the river, silver riffles in the dark water. The light dying in the west. There were more houses near the road, more square stands of grain.

Full dark settled down, everything gone to shadow in the blanket of smoke. She listened for dogs. Before it was too hard to see, she veered from the road to the edge of a field. She crawled in among the stalks, righted them after her. She untied her blanket from her shoulder, set her travel kit beside her, curled into a ball and covered herself.

She woke just before dawn. The air low, chill of autumn. No wind. She coughed into the blanket until her ribs ached. Drank mullein tea from her waterskin. Then she wrapped her belongings in the blanket, all except her fishing tackle, and left the field.

She backtracked to the river, made her way down the bank. Downstream was the bridge, upstream the stumps of cottonwoods lining the banks. The river flowed fast, steadily shushing in the dead roots. She heard thunder and looked to the east. Flame glow flickered in the smog. La Sen speaking.

She searched the bank for bait, the insects and worms hidden in this season. The sound of water rushing by, the rumble of the mountain. After searching the dead brambles she looked up to see two boys watching her from the bridge. She raised her hand but they didn’t respond.

She sat on a boulder under the bridge. Taste of wet stone and ash. Mist on the skin. She fashioned a fly out of brown fern fronds and thread from the hem of her blanket. She cast and recast into the quick river by the roots and black hollows but nothing came up.

Late in the morning she decided she had to move on. The land, not her home, seemed closed to her. She climbed out from under the bridge and started down the road, chewing a piece of jerky. When she was done she hummed a song to quiet her aching stomach. The road ran on until it dissolved in smoke.

In a little while she met the boys again. They came out from a house set back from the road. The smaller one held something wrapped in a rag. They called to her, and she stopped and waited.

They came up and stood armslength away, speaking long chattering strings of sound like mocking birds. Questions there, but she didn’t understand. She signed as much. The boys looked at each other and whispered. Then the smaller one held out his parcel.

She took it in both hands and bowed. The boys giggled. They said something, then waved and turned back to the house. She waited till one of them turned again so she could raise her hand to him.

In the parcel was a bland wheat cake, dry and crumbly. She ate it as she walked, stowed the rag in her satchel. Smog in yellow opalescence with the passing day. The hairs of the mullein leaf tufted against her lips. The voice of the mountain, speech of the very stone.

Their own mountain was awake. The gouting of smoke, fire glow, boiling stone. She was with the sheep in the rocks and scrub when it started. A deep cracking sound. Stones raining down. She dove under an overhang. The black hail pelting the land. Many of the sheep were struck and killed. It was worse in the village.

Home, where the hovels roofed in bark stood hidden among the trees, on the slopes of Ed Da. Home where the little streams tumbled out of the rock, where the cedars grew. Home, where the sheep roamed in the rocky plain and the buckbrush straggled. Home where Shas Ta rose higher than anything, icewhite, stoneblack, tusk of the earth, erupting fire from her peak, her black soot plumage.

As the day wore on the houses drew closer together, nothing but side-yards between, the plots of grain in front, often a thin dog roped to a post. The obligatory antenna stretching from the chimney, waiting for a signal. People passed like shades in the alleys behind the houses, where the smoke settled and never moved. Others walked the road cowled against the autumn chill, faces masked in cloth.

She was hungry, her legs burnt with fatigue, but she went on. Late in the day, the first of the pyramids emerged from the haze, dun-colored, squat and stepped. As she approached, the line of supplicants grew thicker. The pyramid loomed over them. From above they had appeared small and flat. Now the steps reared steep, the peak invisible.

Around her the close press of human flesh. Their coughing, their dull fetid smell. Few spoke, none signed, all seemed alone in this vast collection of persons. The pyramid grew taller but not closer as they shuffled forward.

At last the base revealed itself between the heads of the swaying throng. The line curved from the road toward it, flowing onto the stairs that lead up in precipitous incline. Beside the stairs was a massive pile of greenwood. Pine, fir, cedar, the needles still stretching from the branches.

As she came up to the pile she saw the priest. Hooded and androgynous behind a mask, charcoal painted over the eyes. The other supplicants were picking up wood and carrying it to the stairs. She stopped before the priest and signed, Come from Shas Ta. Foreigner, pilgrim. Bring an offering.

The priest looked at her with blood-shot eyes, unmoving. Then waved a hand at the wood, at the pyramid steps.

She chose a branch, still weeping sap at the ends, the grain wet. She put it across her shoulders and started up. The steps were earthbrick, close set. Immediately her lungs gripped. The wheezing and coughing around her intensified. The mullein rasped her chin. Signing in her mind, I am safe, I am safe.

The smoke lessened as they rose. Here and there pilgrims sat slumped on the steps, faces in their hands. She dared a glance down – the road and dark houses and yellow blocks of grain were inchoate and unreal.

It was near dusk when she reached the top. She emerged from the smoke into clear air. The haze filled the valley around her like a sea. To the south the islands rose from that sea, the peaks of the other pyramids, all with their fires, their trailing smoke.

She stepped onto the plateau at the apex, and here was the fire, livid coal glow, tangle of blackened limbs clawing outwards. The smoke flowed west, away from her. A fan of pine needles crackled as it kindled. She pulled her mask away and breathed and it felt fresh as a cold stream.

The old woman ahead of her laid a possum on the fire as an offering, then turned east and held her arms up, eyes closed. The hair sizzled, the singed smell met her nose. She stepped up to the fire, feeling the heat harsh against her cheeks, her shins. The possum’s teeth bared.

She let her branch fall onto the flames, sending up a splash of sparks. Then she reached into her blanket and took out the small bag of herbs, the offering from the village. She caught their sweet tang as she dropped them into the coals.

The sunset was orange over the western mountains. She could see the line running across, where the forest ended, the point the woodcutters had reached. She turned east, and there was the peak of La Sen, boiling fire, streaked in black stone and gray snow. The pyramid insignificant in comparison. The old woman had gone down.