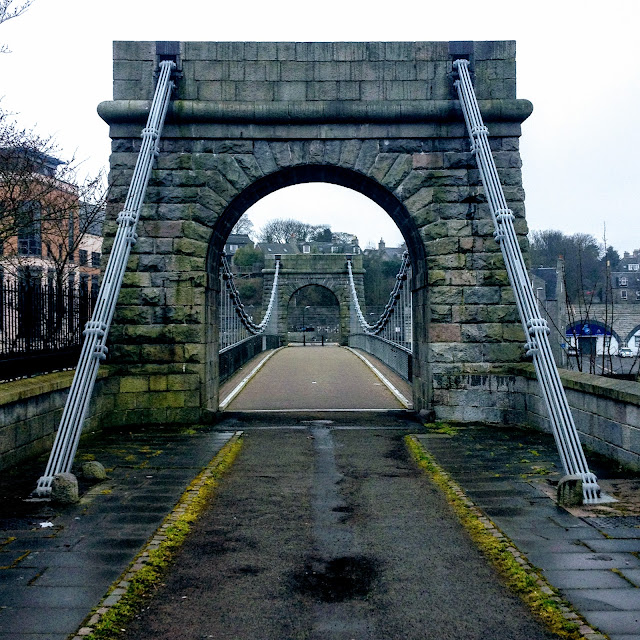 We came by train. The seaside speeding past. Gulls hovering in the onshore wind as though suspended on strings.

A tiny ruined church, no roof, tree growing inside its walls. Leaning grave markers. The low wall about the burial ground right at the edge of the cliff.

Everywhere it is the same, Azores, Devon, Aberdeen. This wild coast, titanic ocean beyond comprehension, gnawing at the ragged cliffs, the great fingers of rock clawing upwards. The gulls haunting the air. The stone ruins full of new grown trees. Stone walls, hedgerows, pasture, on every slope that will bear it. Great industrial constructions, masses of pipes, blank walls. For who knows what purpose. Windmills that hardly deserve the name, five hundred feet tall, turning with an even beat. Expressway or rail line, drawn across the land like a mark on a map, and on either side the wide fields plowed to broken clay, bare to the sky, battleground waste.

In the towns, roofs of tile or slate, walls of mortared stone. Old ways, new additions, little distinction between eras, the unbroken revolutions of living.

Spindly cranes swing over the city, the rumbling diggers make deep scars in the bedrock.

In Aberdeen the gulls swing through the gray sea mist, over the roof peaks, or stand calling from the chimney pots. Rows and rows of flat-faced houses of the same granite, as though carved from a single great stone that used to lie here.

The trees are bare except for crows, the grass green over their roots. In Devon the daffodils were blooming, but here it doesn’t yet feel like spring.

Last night we walked through the city – the old part with cobbled streets, the tall gothic edifices seeming to lean over us, edge out the sky. The train station and the new buildings around with their improbable glass façades. Motorways full of traffic, walls beside the train tracks topped with barbed wire or a twisting construction of metal whose spikes looked like either forks or hands. An old stone retaining wall full of moss, dark alcoves at its base. Rows of shops, the quotidian type, trophies, car stereos. A bridge over the river Dee, built in 1830, now given over to pedestrians. The same granite blocks in the piers as everywhere in this city, the whole of it joined by this, the crystalline flesh of the earth.

Before we crossed the bridge, we heard a mockingbird running through its raucous songs, battling traffic noise, the melodies new and foreign to us.

On the ferry. Outside, the gray city, blocks of cement, granite spires breaking toward the sky, clouds close and folded.

Under us the rumble of the engines begins. The bar is full, almost nowhere to sit.

Leaving is a slow slide away from the dock. Inside, hardly a suggestion of movement except the vibration of the glasses on the table.

Aberdeen is behind us. A brief moment on our journey.

The dark sea. The port is white oil tanks streaked in rust and mildew, the ponderous movements of ships like ours. The blank lines of the granite houses marching the hill. Waves wash up on the stone beach. On the headland is the smooth green of a golf course. At its edge a number of little garden plots, fenced with all manner of materials, pallets, blue plastic.

We are on the sea. The breakers roll toward shore, ponderous, low and steady. The green rocky coast falls away. After all these islands, the planes and trains, it feels right to be on the sea.