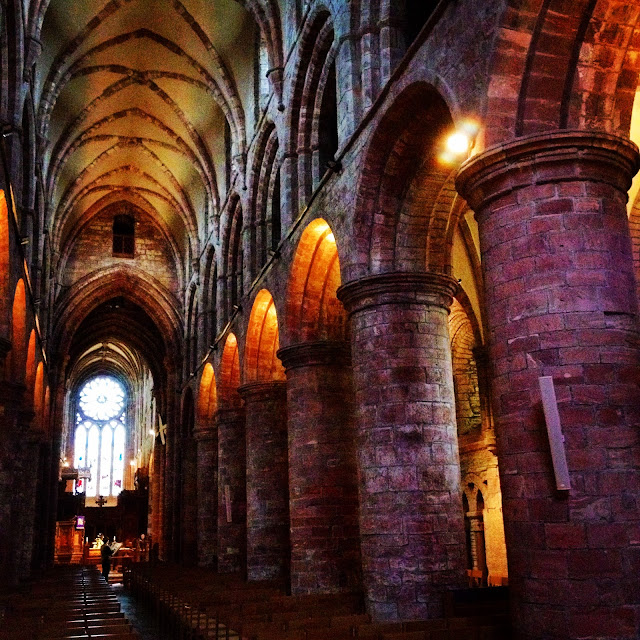 Again the dislocation of travel, inside a bubble with dark windows that only reflect our faces. Low ceilings, short carpet, seats built to hold people in transit. Boat, bus or plane. Strange motions caused by the outside world, the origins we can’t discern.

We disembark from the ferry late in the night, the bustle of the other passengers around us, changing mode of transport. Line of taxis by the terminal. The endless walking down walkways, tubes, stairs, standing in lines, is almost over. Board a bus into town and the group in back bursts into a round of song, not something old, might as well be off the radio.

The town is lit, but empty. We clamber off the bus near our hotel, but it is still a walk through narrow streets. The buildings low and dark, mortared stone.

We turn the corner and here is the cathedral, blood-red sandstone walls and spires in floodlight, the plane of the roof dark shadow. We stand stunned. Ash coughs and has to vomit in the gutter. It is early morning, just past midnight. We are the only people. The air is still, everything is perfectly silent except for Ash’s retching, the crumple of our clothes, our rubber soles on the cobbles.

She is all right, it’s the baby’s way of making itself known, that and the heels that bump out of her belly, or kick her in the guts.

Our babe, you are on the Orkney Islands now. In some way we know that we come from here, and I think you will too, perhaps twice over, because you will have been here. I start to say, ‘You won’t know it consciously...’ but what do we know that way? Not much … What brought your mother and I here was a feeling. What made you was a feeling, of connection, a meeting and merging. As we merge with the places we have been, leave something of ourselves, take them with us.

There is a baby across the room as I write, and I am thinking of you, how you’ll be in the future. On this journey we’ve coalesced into a family – both your mother and I have felt that. The particularity of us three, mother, father, our first child.

We find our way to the hotel, the manager is kind and makes Ash a snack. We shower, sleep fitfully, wake with the island daylight, gray and promising. While Ash rests, I go downstairs to eat breakfast. Meat of all kinds and eggs and bread. Coffee. A stereo plays show tunes into a dining room out of the year 1800.

We pack and go out, and the first place we go is the cathedral. Drawn as if by gravity. The rust-red stone in the cloudy light, medieval ironwork scrolled across the doors.

Inside it is pillars and arches and high vaults, grave markers from hundreds of years ago, the stained glass casting its brilliant beams. A space that aches for song. Every echo calls for it.

We move through it in the mode of worship, not so much of the changeable Christian doctrines, but of the thing itself, persisting for eight hundred years, these beautiful echos, the shining images in glass. It is a space that holds history like a cistern. Every touch speaks of someone who has touched here, this stone. Every shuffle of the foot just like a thousand forebears. We are stunned to whispers in reverence of that potent silence, the stones reflecting back our quiet words of awe.

After the cathedral we have cream tea in a small tea room, full of tables of older ladies. Grandma Bobby hangs in the air around us, in the warm milk and laughter and smell of baking. Outside crows nest throughout a bare tree.

Next we go to the museum. It is here we catch our first glimpse of them in the flesh. In glass boxes are the things they made. Fine bone needles and awls, beads, paint pots. Stone ax heads and maces in perfect symmetry, smoothed to an impossible polish, made for human hands.

We like to think of them as so different from ourselves, as to be non-human. We are our only human referents, everything different moving further from this central point into obscurity, a fog of the unknown.

But here are their pottery vessels, decorated with nodes and grooves. The utility of decoration, of beauty. If you have the time why not? and further perhaps you should make the time. By this we know they are human undeniably.

These people kept animals, made cheese and beer, wore a costume that can’t be too distinct from ours. They wore jewelry and ornament. They lived in small, snug homes. They raised grain, ground it with stone.

I step into the next room and of a sudden, here is one of them, one of us. A skull, thigh bones, knuckles in a line. My hair stands on end.

More than their houses and tools persist. Here are their very bones, that felt and lived and moved through this landscape, just as I am moving now. In spite of this repurposed old building, its sterile white wall and boxes of glass, I feel I am suddenly in a holy place, a kind of tomb, where I have unwittingly come to commune with an ancestor.

On the bus ride out of town, a large green tractor drags a machine across a field, casting fertilizer in a mechanical spray. Beyond it, on the line of the hill against the sky, is a circle of standing stones. Silhouetted, they are hard, dark, ragged, eternal.