Loaves to Fill the Maw of the Light Box

Social media is a silent scream. A box full of white teeth. When I close the laptop I am left with the impression of cacophony ringing in my head. Silent as stars, their clangor of light.

They are called sites, but they seem to exist precisely nowhere. When I look up, when I come back from that abstracted place, I realize I have not felt my body in some time. All these minutes or hours, tensed, still, in this chair.

I have been educating myself and connecting with others, in this time when that is so important. Tapping at the key board is crying for action, is calling desperately for some idea of what to do. Necessary in this chaotic moment. At the same time I recognize that, as I’ve been in this online social space, I haven’t been mindful. I have been consumed in it.


It is not inert, not a blank slate. It is a feedback loop of outrage. A Plato’s cave of the skull, seeing only shadows, refracted light. The faces flattened to pixelated images, the illusion of depth. The nuance of the living, compartmentalized, codified, simplified, atomized. Hash tags and search terms. Tweets and memes.

In this dark age, we sit before our bright rectangles as others might before a hearth. The stories of distant heroes and antagonists writ in flowing light. Now we do it in all seasons, at all times of day, and essentially alone. Our muscles tensed as if in some torrid dream, eyes glazed and staring at the middle distance, never refocusing. Our faces slack, only the tick of a smile or frown marring our flaccid mouths. Our opposable thumbs nervous, obsessively swiping.

An echo chamber, only human voices heard, reinforcing fear and rage my cramped body cannot release. One among billions of clever apes, twisted up in our own net, sitting unmoving in white boxes, cells we willingly enter.

The worst
is when people – knowingly or not -
carry prison inside themselves...
Most people have been forced to do this,
honest, hard-working, good people
who deserve to be loved as much as I love you.

These days it is important to be together even if we are far apart. To feel solidarity. To know we are not alone. Why do we go to social media for this? I think because it magnifies our feelings. The reverberation can raise our hopes to equal our fears. If a tide of bigotry and authoritarianism is sweeping the country, our sense of justice must be elevated to an equal counter-tide. An army to face their army.

We need to go there, to disseminate essential information, to organize, to help bring us together in real space and time.

Too often though we see the information space itself as territory we’re fighting over. To withdraw is to cede that territory and declare defeat. But it is not a neutral space; it is the very space that created the internet troll. Some of them believe they meme’d Trump into the White House, and in many ways he is their most florid exemplar.

Much has been made of our ever more rarefied political bubbles, all the news (real and fake) that reiterates our biases. We know algorithms craft our experience online. As they refine their knowledge of our online behavior, they know what to show us to make us click. Literally, pushing buttons. When we go online we enter an economy of clicks, and the way to increase clicks is to trigger our emotions. We may be influenced by ideologies, but the most basic ideology at work in our current state is that of commerce, and the real winners in this time of political discord are the ones reaping the benefits of emotional clicks. They won’t stop fomenting them.

Hence my feeling of my mind screaming while my body sits in tense stillness. My hopes and fears played to a screech, high up the fretboard.

This is what I’ve come to, my admonition to myself: use social media for your purposes. Let the technocrats make their penny for the service rendered. Do not be consumed. When you find yourself spinning, clicking and scrolling and spiraling into a heightened state, withdraw. Refuse the raw deal. Remember the breadth of your life that gives rise to this one moment, among all your moments. Your feeling body. Go walking. Look at living things, going on as they always have, the human yammer irrelevant. Think into their lives. Do revolutionary things, like work with land to grow your own food. Buy less. Work for trade. Bake bread. Read the story in a fire. Look on someone with love. Let yourself be consumed by that. Let yourself feel unseparate. Let your body be consumed by the world, it already has been. 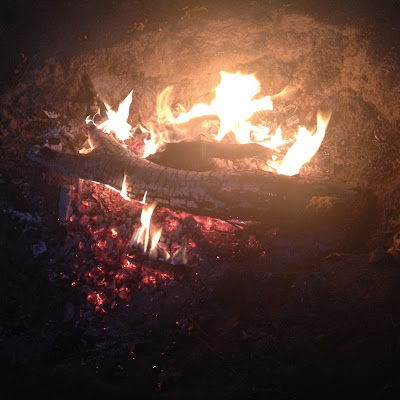