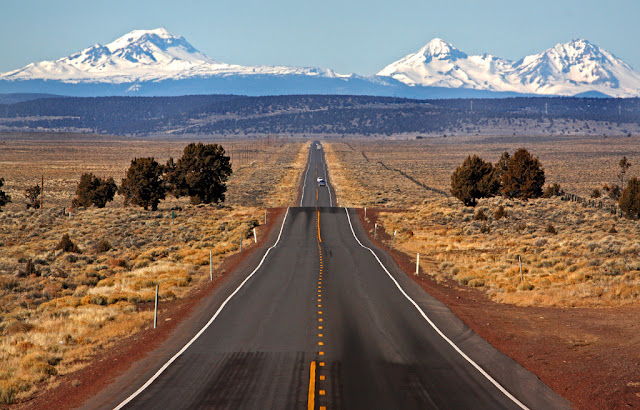 I am in the car with my father. He’s at the wheel and he’s going fast. We’re both enjoying the speed. On the side of the road, the sagebrush is a blur. The high desert plain reaches off, flat and cold and dry, heaped with lava rock cairns. The mountains battle a pale sky. It is November and the peaks are powdered sugar. Ahead of us the road stretches out, straight and narrowing until it disappears in the distance.
My father has been working on this car for years. It’s a Volvo 544 coupe from the sixties. His care is evident in the gloss of the paint, the fabric of the seats, the dash console with its stark white numbers. I think it looks like one of those gangster cars from a black-and-white movie, with the headlights in the lobed wheel wells, the sloping tail, the hood like the nose of a surfboard. I told him that once, and I think he liked it, because he gave a little smile and then went back to talking about the exhaust manifold.
We aren’t talking much, just leaning back in the seats. The wind is howling over the hood. I think my father is slowly pressing harder on the gas.
It seems like we’re going a little faster every moment but it’s hard to tell, like watching the moon rise. You can almost see it move, but not quite. By tomorrow morning it will be setting on the other horizon.